Is Storm Damage Covered by Insurance

Posted by Rumsey Construction and Restoration at 2:36 AM

You’ve just made it through a tornado or hurricane or massive snowstorm. The dust has cleared, and you’ve managed to assess the damage to your home. You now find yourself wondering if storm damage is covered by your homeowner’s insurance. The short answer: usually. Most types of storm damage are covered with a few minor exceptions and one major exception. 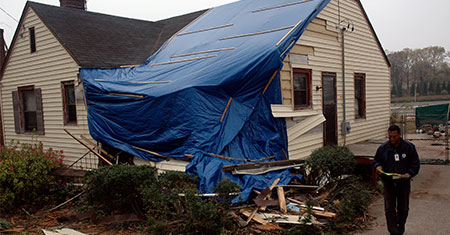 What is Typically Covered by Homeowner’s Insurance

Water and ice damage as a result of a storm are generally covered up to policy limits. This is any type of damage – interior or exterior –caused by excess rain, snow, or ice. A minor exception to this would be a sump pump failure due to excess rain if you don’t have sump pump coverage, which is almost always a separate endorsement on the policy.

Damage due to lightning strikes and power surges are typically covered under standard homeowner’s policies, up to the policy limits. Fire and smoke damage are common issues caused by lightning strikes. Depending on your specific policy, damage to electronics and appliances from electric surges may also be covered. Coverage for electronics in power surges isn’t necessarily standard with all insurance companies, so it should be discussed with your agent when setting up the policy.

Wind, hail, and fallen trees from storms are common causes of exterior damage to the home typically covered under most homeowner’s policies. Interior damage can also be caused by wind-driven rain or snow. Wind can force shingles, flashing, and siding to move, allowing precipitation to enter the home and damage ceilings and interior walls. This type of damage is also usually covered. Most policies also cover damage caused by fallen trees or limbs, assuming there was no negligence involved, such as failing to remove a dead tree.

The one general and major exception when it comes to storm damage coverage is flooding. Flooding, by insurance definition, is vastly different from the general population’s understanding of the word. This specific type of flooding happens when water comes across the ground and enters the structure from an opening, such as a door or window, or from seepage. It’s extremely important to understand the difference between a basement that has “flooded” from a broken pipe or backup, and a basement that has actual floodwaters inside, so you are able to correctly tell your insurance company what’s going on. Often people will say their basement is flooded without realizing that’s not actually what they mean, leading to miscommunication and delays in coverage at best and being told the damage isn’t covered at worst. There are some insurance companies that offer an additional flood endorsement, but these are few, and their availability is dependent on several different factors such as location.

The most important thing to remember as far as storm coverage goes is: communicate. If you have questions, ask!  Call your agent and discuss what type of coverage you have in the case of storms that are common to your area. Don’t be afraid to bump up your policy limits and add endorsements you think are necessary. The best way to be prepared for possible storm damage is to know your coverage. And, when storm damage occurs, a professional storm damage restoration company will be able to help you navigate through the details of your insurance claim to get the maximum payout.

by Rumsey Construction and Restoration

Aftermath: What to Look for After a Storm

No matter what climate you live in or what time of year it is, storms are inevitable. And, the unfortunate fact is, where there are storms, there is s...

Yes, even in winter, Charlotte residents can suddenly find themselves facing severe weather like tornadoes, high winds and heavy rain. Many homeowners...